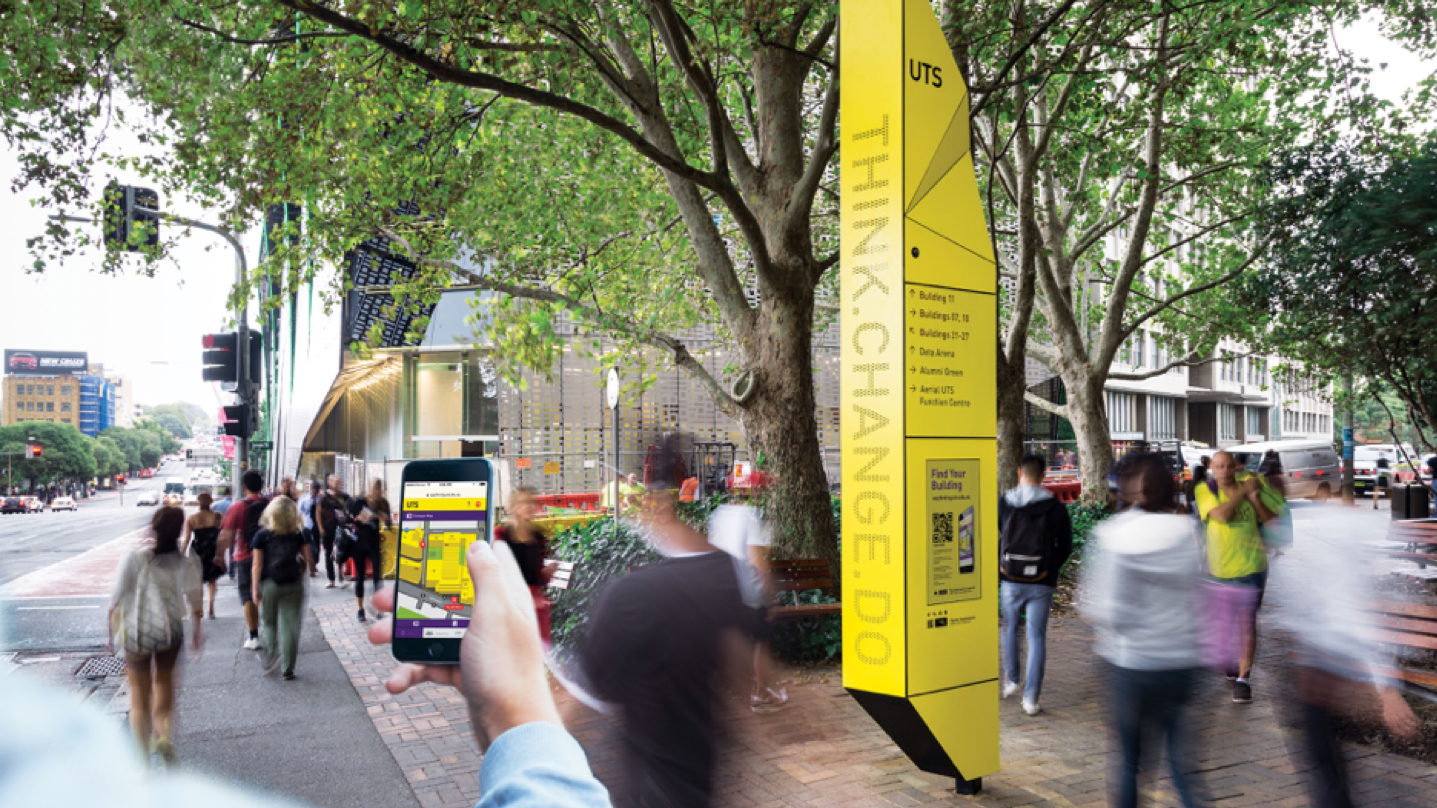 On November 15th, 2017, PAM joined together with our unofficial partners, UTS to discuss the innovation born out of their $1 billion renovations. This discussion explored the development from scoping out the project to an audit of over 110 floors to the creation of an interactive wayfinding platform for student use. As a technology university – settling for traditional wayfinding was never an option, and UTS worked together with PAM to create a campus eco-system that drives the innovation which is both their brand and their culture.

This was no small project, and we were pleased to have the chance to find out more about how each stakeholder played their part. Find out where all the pieces of the puzzle came together below, or check out the video, transcript and presentation.

Tell us about the UTS master plan in terms of the goals and scope of the project?

It was part of a $1 billion master plan where wayfinding came in during 2013. Stage 1 was our signage manual which was nearing completion by frost*design. When it came to stage 2, we looked for a head consultant and our tender brought in BrandCulture.

“Our existing signage was ten years old, so it was a unique opportunity to bring in a new system for best practice and to match the university’s strategic vision.”

With everything changing around the university, it’s a challenge to manage documentation, let alone install, a new system across a campus including public domains. The project had to factor in pedestrians, shopfronts and the good lines; on top of student and visitor interactions.

What key issues did you identify through the process?

“For us, the biggest issue was signage clutter.”

After testing with students, asking what they wanted and the main complaint was that it was overwhelming. Every stakeholder in the university wanted their names in key buildings so signs would be in building one when the person or faculty was in building 7. With so many signs in such a large organisation, a lot of it becomes redundant, and it fast becomes outdated with name and faculty changes.In trying to make signage simpler, asset management and strict naming conversions became important. Once we had these, we wanted a simple user interface for people to look at that information.

“Spreadsheets are great but trying to work out what direction an arrow on a specific sign from that is incredibly difficult.”

Once you have all the signs, getting quality control and defect inspection on 8000 signs is no small task, so we’re grateful to BrandCulture for that.

Given the complexity, how did BrandCulture approach the signage and project?

“It was a substantial project, even looking at 18 buildings undersells it because we looked at in terms of 150+ floor plans.”

Of those 110 had existing signs to audit, 46 needed new systems completely.

“It was a hugely complex project that required smart solutions.”

Take us through the process of designing a solution

Well UTS is a genuinely technology focused university, so driving solutions is their brand and their cultural DNA. Their space as well is in a constant state of flux even in 12 months into a 24-month project there’s 100 things that might have changed in the background.

“The easy solution – the one that springs to mind for this to solve our problem is a digital solution.”

We wanted a bespoke system for the university that could be outsourced to production to stakeholders and went through a lengthy industrial design process to design a magnetic interchangeable system. That would have meant the sign face could be removed and replaced.

Stakeholder management seems to have been quite intensive, how did you resolve those engagements?

We audited 100 floors and over from 10 years ago, that’ll be something that needs updating and clarity 12 months later. Taking photos of the location can be difficult because even with good systems you can lose track of where that photo was, and it can be identical to the floors above or below.

“Even with good auditing practice, you can end up churning data and details for the same location a few times. The first thing we did was try to cross reference photos and notes with sign details on a cloud-based platform. Once we did that with an interface over the top, we could say “there’s the sign, this is what it looks like.”

How did digital signs connect with mobile wayfinding?

“The result of doing this all through PAM was UTS that had a source of truth.”

The best thing to do with that source of truth was use it for the student benefit and put that information into their hands.

Can you take us through the process involved in creating the digital wayfinding vision?

Working with traditional existing signage but, like BrandCulture, the aim was to weave in technology. Meld was also working on the smart campus plan and looking at what could be achieved on the broader spectrum of the  campus.

“The most important takeaway was the student experience.”

We wanted to work on this while using the systems people were comfortable interacting with. We interviewed everyone from international students to IT to campus security to get a clear picture.

“What came out of it was that we needed to address the issue of accessibility. In 2014 when we did the research there were 1200 UTS students who identified as having disabilities.”

What was interesting in this was the broad spectrum of accessibility the campus needed. Factoring in everything from enabling students with visual and hearing impairment Asperger’s meant consider options that supported every student. In the end, using student’s phone won out as a way that was personal, available, familiar and adaptable.

“This made it a case of, we have the digital information, how do we put it in people’s hands.”

With 65 sign types, integrating a relationship between the phones and physical signs wouldn’t have been easy?

We needed a common denominator given the needs of the students, so we created options to cover all bases including QR codes, beacon technology and NFC. This meant regardless of sign type, people could walk away with the information. With different phone types and app stores though you’ve got to work out how to service everyone.

“What PAM developed was a microsite as a common ground that meant you could use the QR code or tap NFC…and walk away with the map. It could do texts to speech and translate through to simplified Chinese. Using it, people didn’t have to download an app, and we can change it as often as we need.”

The totems themselves hold a lot of technology as well?

There’s a host of other technology points like WAP, Wi-Fi access points, security cameras and interaction points that made them smarter. By adding all this we could get as much value possible out of those totems by adding or removing technology as it was needed.

How did PAM go about developing this and rolling it out on campus?

We ran it out over about two years, continually checking in with people about how they approached it.

“By putting this in people’s pockets, on their phones, we could give them the 5000 pieces of information we had on where places and people are.”

In doing this UTS could also link them to events with more active destinations that told them where something, like graduation, was being held. This was all tested with student groups of about 20-30, constantly checking back in to see how they’re interacting with it. It’s also important because this allowed confirmation of phone types, there’s an incredible amount of iPhone 4’s rolling around campus and it’s important to know you have that and iPhone 8s as well so you can create the interface for them.

Initially you had rolling digital directories and now you’re prototyping something new?

It started with the digital screens that could be immediately updated and scrolled through the destination list.

“What is being prototyped now is bridging the interaction gap between the phones and the signs.”

By adding the tablet to existing screens, that acts as an incredibly flexible interaction point and uses the screens that are familiar. This means it opens up from one to one communication to one to many – you search the campus map, take the QR code and it puts that same information right back on your phone.
—
The panel event was an extraordinary look into the wayfinding journey in UTS’ recent renovations. From not so humble beginnings auditing 8000 signs, this project developed an entirely new system for digital signage, student interaction and personal wayfinding. In the process, UTS and PAM created a source of truth to protect the wayfinding investment for years to come.