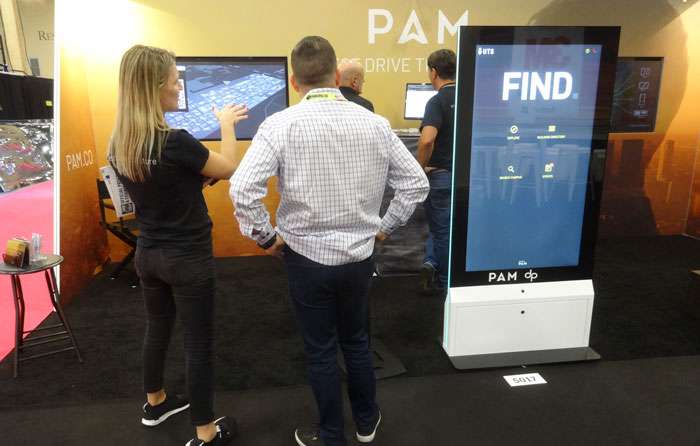 PAM attended the 2019 ISA Sign Expo last week in Las Vegas. The show brings together the largest collection of signage and wayfinding technologies in North America, including print, digital, software and hardware exhibitors.

For ISA2019, we prepared Pam to help exhibitors and attendees find their way around Las Vegas and around the exhibition floor. Users could identify any point of origin in Las Vegas (including their current location) and find their way not just to the Mandalay Bay Exhibition Center, but right into the expo and to a booth they wanted to visit. Here’s PAM Founder and CEO Stephen Minning demonstrating the features of “The ISA Experience”.

In addition to this special ISA Sign Expo feature, we showed a range of other Pam technologies including PAM OS (take a look at our demo video here). We demonstrated a range of PAM 360 digital touchpoints, including PAM 360 Connect interactive digital wayfinding for events. PAM 360 Connect includes a digital handshake via a QR code to our personal device navigation solution, PAM 360 Explorer. We also ran an ultra-thin double-sided kiosk provided by Design to Production, which delivered kiosk functionality including campus wayfinding and other information.

Trade shows provide us with the opportunity to not only show the industry what’s next for wayfinding, but also what we’re implementing in some of the world’s high-profile public spaces including stadiums, casinos and universities.