UNIVERSITY OF TECHNOLOGY SYDNEY PARTNERS WITH PAM FOR A SMART CAMPUS

UNIVERSITY OF TECHNOLOGY SYDNEY PARTNERS WITH PAM FOR A SMART CAMPUS

A New Generation of Wayfinding for a Smart Campus

In 2011, UTS began implementing a bold City Campus Master Plan – a vision to deliver a vibrant and engaging education precinct that will fundamentally change the way the university delivers teaching, learning and research. The City Campus Master Plan has now delivered 14 projects in eight locations including four new landmark buildings designed by acclaimed architects such as Gehry Partners, Bligh Voller Neild and Hassell.

In the midst of this $1+ billion renovation, UTS realised it needed a coordinated signage system to bring its master plan vision to life. 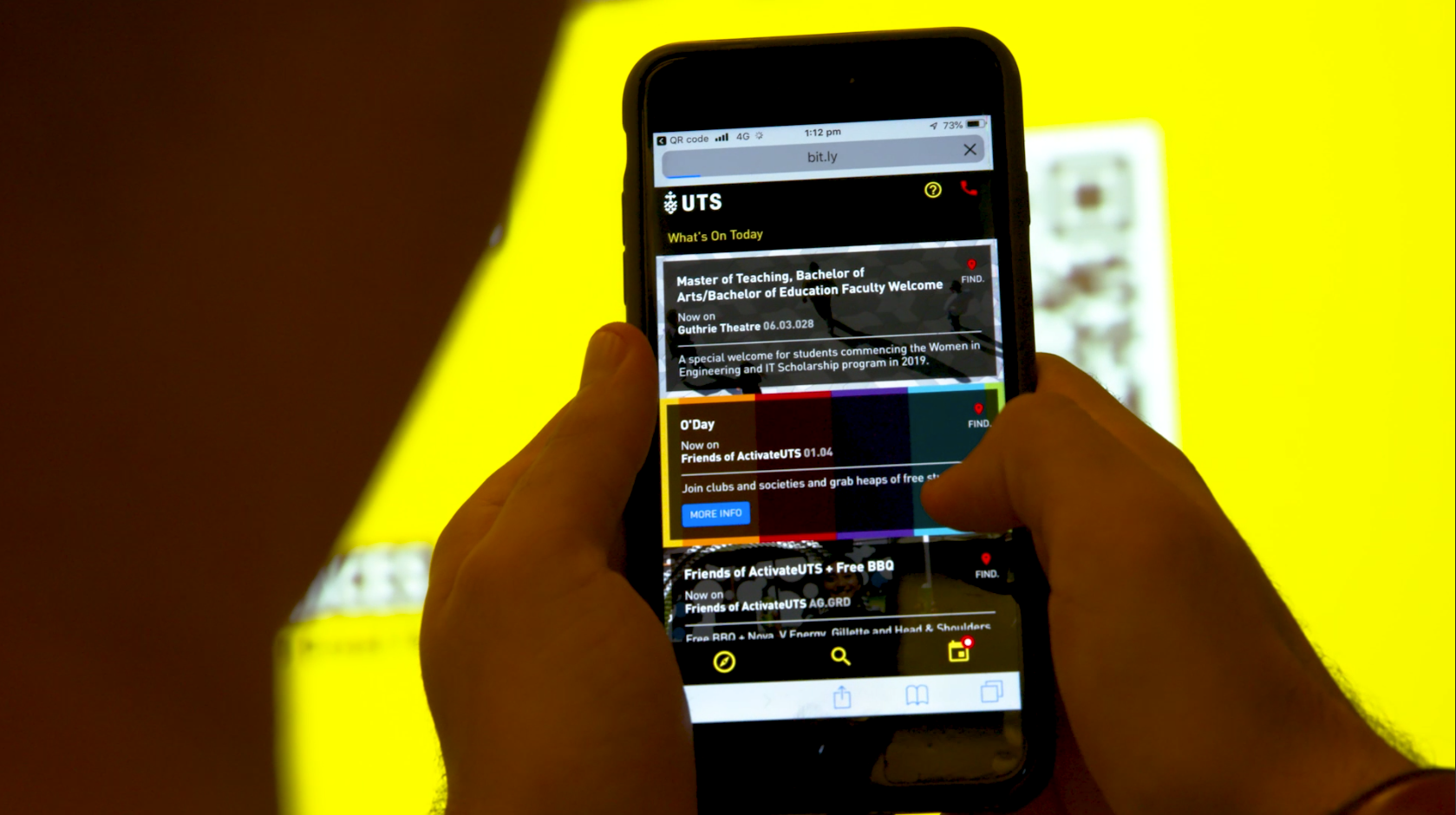 UTS began collaborating with Pam Wayfinding, using the platform to audit existing signs in weeks, instead of months. It also used PAM to juggle feedback between project and faculty managers, signage manufacturers and designers while designing and implementing 8,000 signs.

UTS wanted a wayfinding system that served students in the way they know best. UTS worked closely with PAM to create a digital ecosystem of physical and digital signs using PAM OS – the first Australian university to do so. Students access wayfinding through signage and PAM 360 digital directories, kiosks, and a personal wayfinding experience called MYUTS, using PAM 360 eXplorer. The popularity of the these new wayfinding touchpoints shows that students are quick to embrace digital wayfinding solutions.

"We welcome thousands of new students every year and enrolments are growing, so taking the stress out of wayfinding is really important.

Previously, we had a lot of problems with redundant signage... a single name change can impact multiple signs across campus, which makes signage a big beast to manage. PAM reduces the costs of refurbishment by helping us to track movements around campus, and I think PAM will deliver a huge saving down track..."
Bryce Hutchinson, Senior Building Information Manager, UTS

The project’s feature element is a series of 4.5m bright yellow totems, which are dotted across the campus and designed by Frost*Design.

PAM worked with UTS to embed connective technologies inside each totem, using NFC’s and QR codes to deliver a cost-effective solution and provide personal wayfinding via students’ own mobile phones.

USE CASE: Events, amenities and safety

PAM helps visitors find their way around complex campuses and districts. Here we show how a campus kiosk helps students find their way to classes, events and retail outlets on campus. Kiosks hand off to mobile experiences for students, and can even provide a touchless navigation and information system.

How to connect students with the campus 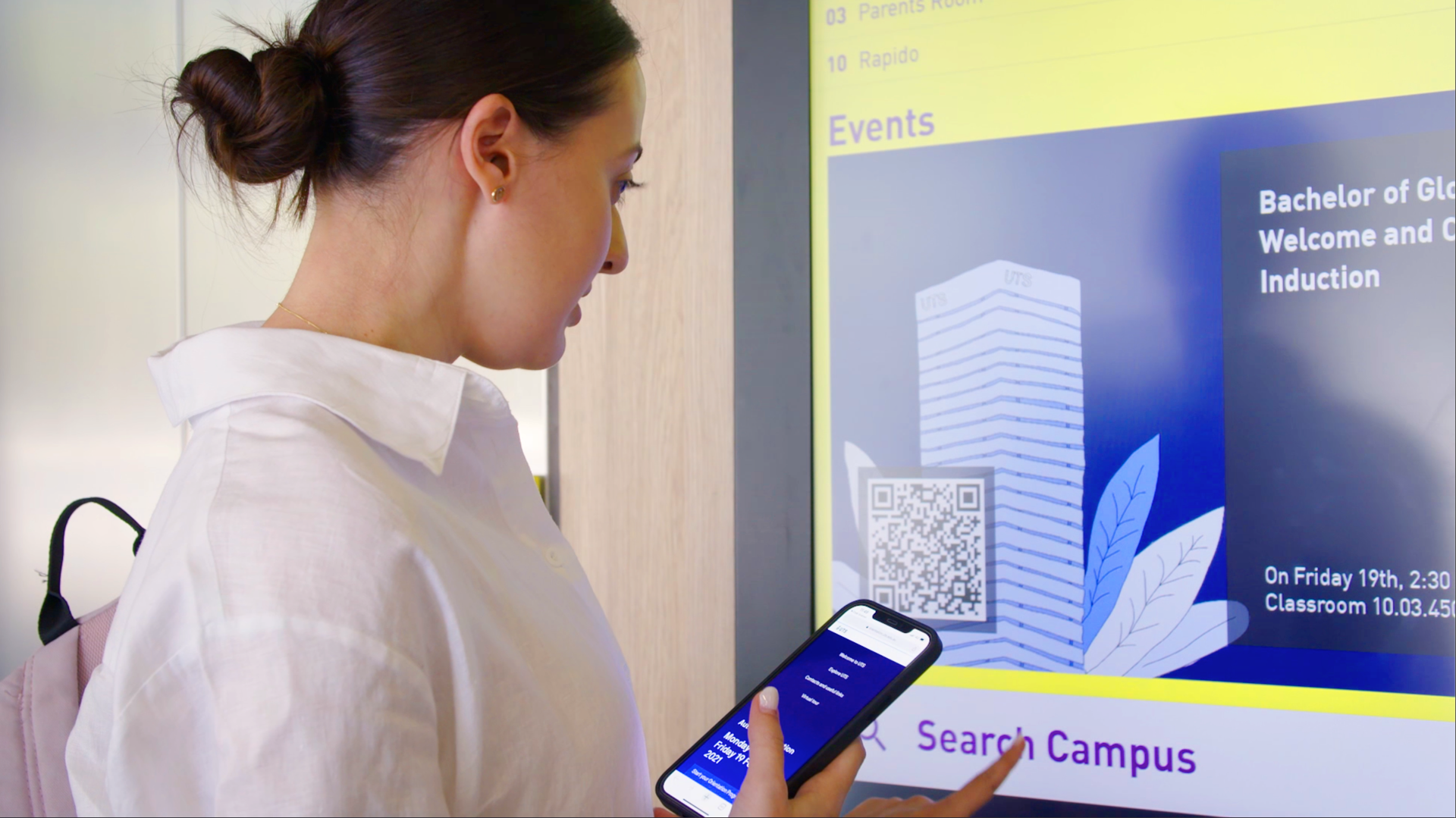 With over 1,000 users and over 12,000 page views in the first six weeks of semester in 2017, according to Google Analytics, the popularity of the UTS microsite shows that students are quick to embrace digital wayfinding solutions.

UTS and PAM continue to collaborate as the campus grows and evolves. The university has launched its first PAM Smart Wayfinding app, ‘MyUTS’, to guide students around campus from their smart phones.

As the campus expands, PAM is there to help guide visitors safely around campus via MyUTS and a new generation of wayfinding kiosks throughout the campus.

Barbara from UTS uses PAM to monitor thousands of signs and make changes to kiosk information or events instantly.

MORE: Installation and approvals with PAM 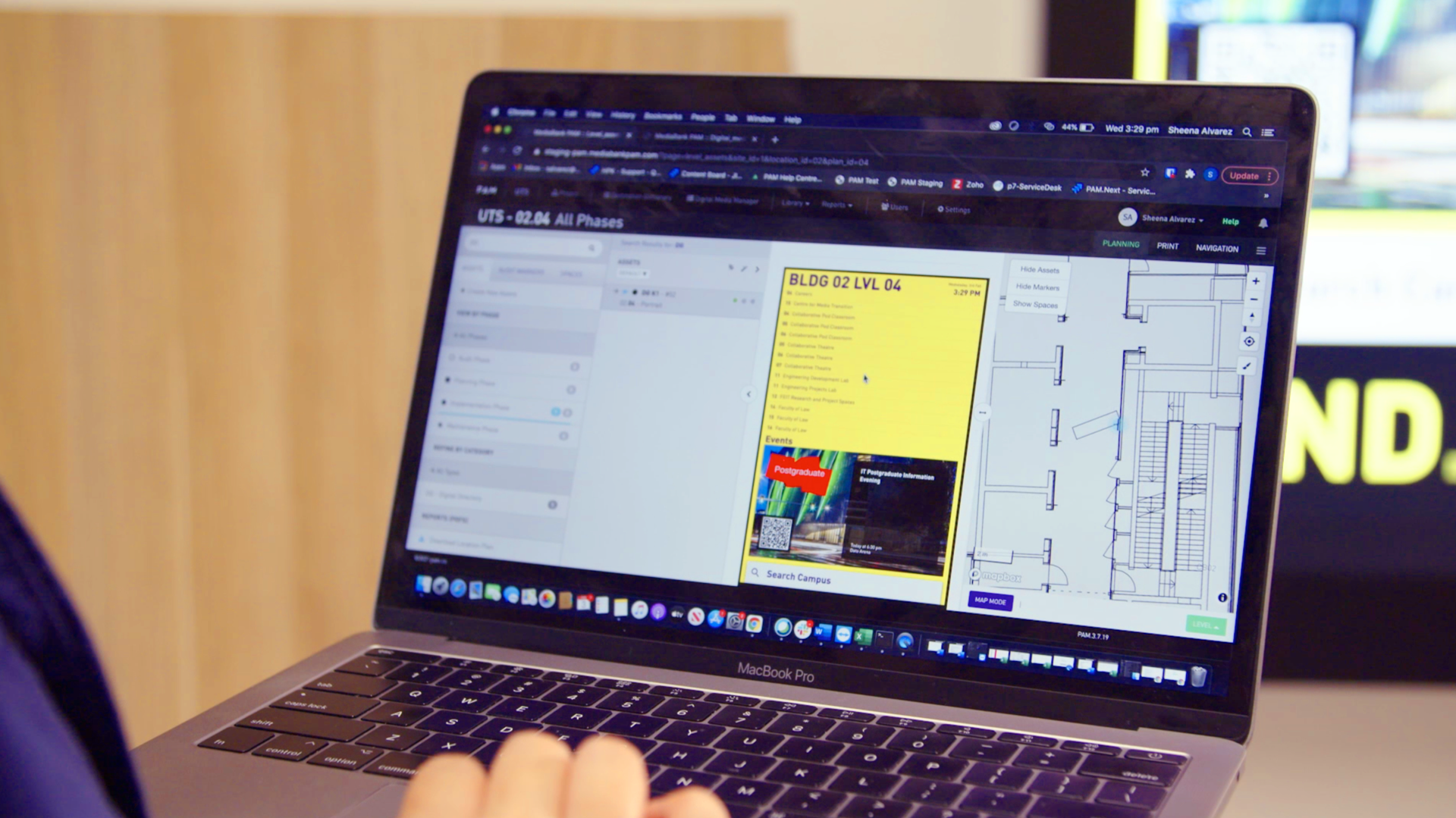 The urban campus in metropolitan Sydney is made up of dozens of buildings, spread over a large part of downtown Sydney’s southern zone. It’s a very

complex network of unique buildings and grounds. The challenge for the university is making sure students find their class rooms, events and social activities efficiently and in a timely manner. Students are generally new to the city and the campus. The critical first day and subsequent weeks influence their ability to adapt to university life and their relationship with the campus.

As a result, 2,780 students used 360 Explorer on the to find their way around, through 15,500 page views. Less staff and volunteers were needed to guide students. Printing cost were considerably reduced.

‘We’re connecting students through the palm of their hand... We’re on the forefront of helping students. It sets them up for success from the very first day.’
Meagan Soloman, Events Officer, Engagement, UTS
Copyright © Mediabank Pty Ltd 2021